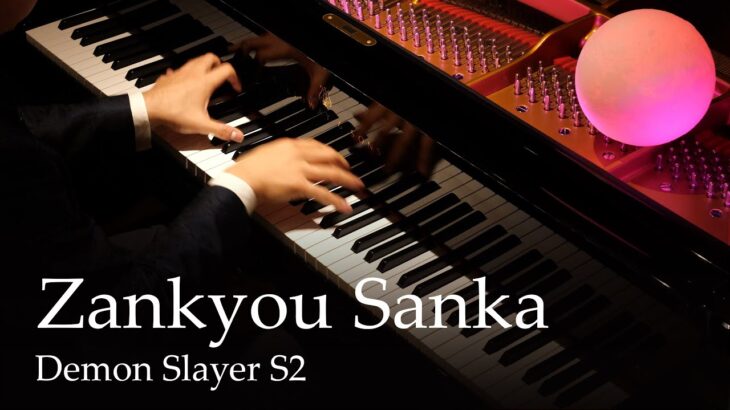 Zankyou Sanka is definitely one of the most FLAMBOYANT opening songs of this year with its fast tempo and with a length of only 3 minutes, the song truly feels like the embodiment of a musical firework: Spectacular from start until finish and over in an instant.

When I watched the opening animation of Demon Slayer S2, I realized how “Japanese” everything was: The busy Taisho Era night life, the colorful fireworks and the lavish costumes of the courtesans. This inspired me to look up for traditional Japanese music and studying its typical musical language.

② Focus on Rhythms
The drum set has a very prominent role in the original song and I took extra care to faithfully replicate all the rhythms for this piano arrangement. This results in a few unusual left-hand patterns, such as the offbeat-rhythm in 0:39 or the busy drum roll in 0:50. I initially also included a few jazz scales in the middle voice as well, but I felt they were distracting the rhythm too much, so I omitted it at the end.

③ The mystery behind Aimer’s “Zankyou!”
I have been pondering for a while how to interpret the powerful “ZAN KYOU” from Aimer in 1:20 and 3:00 on the piano. Aimer is singing a grace note here, so I had a hard time to decide whether it is a F#-G# or G-G#. In the end, I also played some grace notes in the left hand to imitate Aimer’s voice and I added an additional lower octave to maximize the impact of “ZAN KYOU”.

④ The “trumpet” or “why pianists should have three hands after all”
My initial goal was to replicate the awesome trumpet melody from the original song, which is playing most of the background melodies during the chorus. But almost all my three-hand technique proved to be next to impossible to play due to the huge intervals between the main melody and the trumpet melody. Never have I wished so hard to physically own a third hand before…

Alright, that’s it for today! Thank you for reading this week’s “Animenz explains” and thank you so much for listening to my piano music in 2021! This is the last upload of this year and I think, I have made fairly good progress this year as an arranger! I explored many new techniques and music forms this year (especially variations), but I still feel like I am at the beginning of my musical journey.

There is still so much to learn, but I will continue doing my best!
See you next time again
– in year 2022!